‘Black Mill’ (‘Czarny Młyn’) is a film adaptation of Mariusz Szczygielski’s novel of the same title. The protagonists of the film are Iwo and his disabled sister Mela – when mysterious events begin to take place in a small town, they, along with a group of friends, solve the mystery of the evil power hidden in an old mill and finally defeat it. Although set in a science-fiction style, the film is above all a story about love, growing up, family and acceptance.

In September 2019, I got a call from the film’s executive producer Wojtek Stuchlik asking me to create a couple of tracks as a demo for ‘an incredible new Polish science-fiction family film’. Certainly, I was delighted !

A few days later I received the first couple of scenes which made a huge impression on me – great cinematography, very good acting and stage design – I had a feeling that I could write music for this project with a grand panache, not only in terms of sound but above all ‘emotionally’. I prepared a lot of material – I was actually  so engrossed in it that a large part of the themes (such as ‘Bikes’ / ‘Rowery’, the theme of Iwo’s Mom) were created during my ‘holiday’ in the mountains – in an old, wooden villa (fortunately, my wife is an extremely understanding person).

It was worth it – I got the job, and the director and the producers listened to the music anonymously at the meeting devoted to the choice of the composer – for which I am still extremely grateful (I was the only surname that nobody knew)!

Working on the Music

After I came on board, we have been discussing a few ideas for the recording, but the atmosphere of anxiety and uncertainty related to the first cases of COVID-19 in Poland and issues with travelling have meant that the music has been eventually created entirely at home, using only a small amount of equipment (including the irreplaceable Minibrute 2s). I have had more time than usual to write and produce the music due to a rather long post-production period and delays resulting from the pandemic situation. In terms of production, it has been the most demanding score I have had to work on – the session files have been gigantic – I have divided the film into 6 reels, each of which after the capture contained about 500-600 tracks; in the session files, the tracks have been often far over 1000.

For a long time, I have been wondering how the music should sound and how it should lead the audience through the world of Iwo – I do not mean the timbres or the themes (more on that subject in the further part), but some form of structure. In the end, the simplest possible idea enlightened me – sitting in the studio one evening, watching, for probably the hundredth time, the moment when Iwo jumps over the gate of ‘Black Mill’ (‘Czarny Młyn’), I have been struck by the fact that this unusually vividly painted moment of ‘crossing the threshold’ changes everything – it starts a series of mysterious events, changes Iwo’s relationship with Mela, with his mother and friends – it is the beginning of the character’s journey in every possible sense. As I had read ‘The Hero with a Thousand Faces’ (‘Bohater o tysiącu twarzy’) a few months earlier, I have taken a decision to stick to this simple, inspiring clue and assumption – the music at the moment of the first jump through the gate changes along with the whole world and nothing will be the same anymore.

The initially mellow sounds (the boy choir in the scene with Iwo riding his bike) and electronics inspired by classic 80s and 90s synths (that is probably why so many people mention the spirit of Stranger Things, which is a huge compliment for me!) transform into modern, aggressive electronic and orchestral music by the end of the film. Furthermore, the music begins to  anthropomorphise evil powers with electronic sounds imitating human voice – synthesizers scream and whine (‘Metamorphosis’ / ‘Metamorfoza’ or ‘Rise’ / ‘Powstań’).

Finally, on the ruins of the Mill, when Iwo`s arc is completed, the gentle sound of a choir returns with triumph. 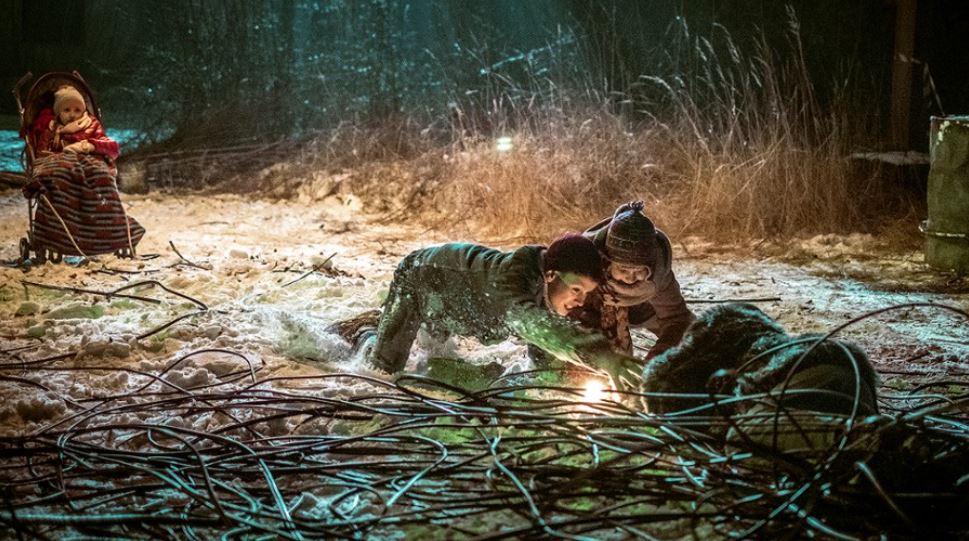 ‘Black Mill’ (‘Czarny Młyn’) is a very musical film in the sense that the approximately ninety-minute-long motion picture is accompanied by over 75 minutes of music. Mariusz Palej has been very keen – as we have mentioned many times in various interviews – to treat the young viewers of the film seriously in terms of music. Not to infantilise, but rather to serve entertainment on the level to which children are now accustomed from computer games and Hollywood productions.  We have also paid a lot of attention to making the music act as a kind of ‘emotional cushion’ – especially in the family plots. I have not wanted to deepen the drama but rather build the viewer up with hope.

Here are few of the key music themes present in the movie:

A Word in Conclusion

Without any doubt ‘Black Mill’ (“Czarny Młyn’) will always remain an exceptional project for me – I have an impression that it is a film which came exactly at the moment when it should have.

I would like to thank Mariusz Palej for the trust and the opportunity to participate in this extraordinary adventure, Maciej Sowiński, Andrzej Papis and everyone at TFP, Wojtek Mielimka and Cafe Ole. I would like to thank Tadeusz Mieczkowski for a great 5.1 mix and Rafał Smoleni for the album mastering. Additionally, I’d like to thank Paweł Stroinski for his help with the compilation of the album and Marika Koasidis for her support and keeping me on my toes – taking care of anything that would distract me from writing.